One of the best things about joggling is all the weird things that happen to you while you joggle, largely due to all the bizarre things people say to you as you pass by. It really is an exercise journey into the Bizarro World.

While most people who say anything say “that’s so cool!” or “that’s amazing!”, there’s a good number of jokers and weirdos out there who can’t resist making sarcastic comments. I’ve even received a few threats(“who the %$#^ you think you are!!”, “get the $%^& outa here!” type of threats) from some gang-banger types, but that was back when I would foolishly joggle through these run-down, crime-ridden areas. 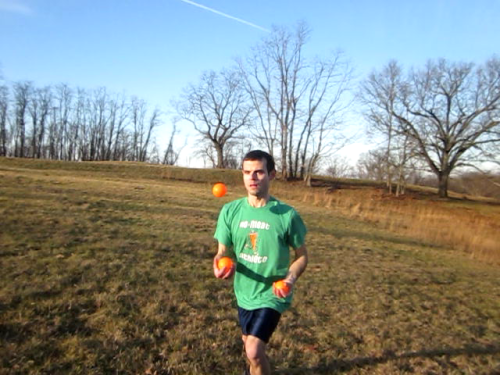 Anyhow, among the more amusing remarks from last year were from this old guy saying “you can only juggle 3? just 3? come on!”. I did manage to respond that I was working on 4, and asked if that was good enough, to which I think he said “great”(I was going too fast to say much of anything).

By far the most bizarre was a few months ago when I had to slow down at this busy intersection, and this young woman I had never seen before comes up to me and tells me “I love you, I really really do”. I didn’t say anything because this was so totally unexpected, and I was trying to catch my breath and darted off as soon as I was able to cross the street. And she started shouting at me again, “I really do!”. Of course I don’t believe she does and this may be her own weird way of expressing admiration.

A few people around here really seem to get it. If I am going slow enough or taking a break, some people will praise me(I’ll tell them I don’t deserve the praise) and start a conversation about how juggling is good for the brain so juggling while running is such a great exercise. I will usually try to encourage them to do it too, but they will say it is impossible for them. Some claim it is impossible for them to juggle even while standing still. But it is just a matter of practice I will say, before parting ways.

Oh how could I forget the man who asked me as I joggled by – “can you chew gum while doing that?”.