The incredible diversity of the Caucasus

Here is a great map showing the linguistic diversity of the Caucasus region: 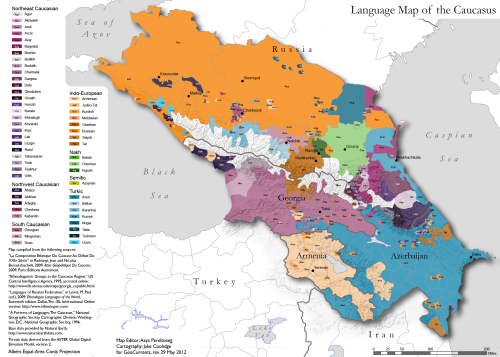 Since this is only a map of the languages/ethnic groups, it doesn’t show the different religious groups of the region(mostly Christian and Muslim of various sects). Some ethnic groups are even divided by religion.

Tolstoy’s last novel, Hadji Murat, was about the wars between imperial Russia and the Chechens and other Caucasian peoples. Much more recently, after the fall of the Soviet Union, for nearly two decades there was an almost non-stop war between the Russian Federation and separatists in the semi-autonomous Chechen republic. Though it is no longer a full blown war, there are still occasional skirmishes and attacks in the hilly areas of Chechnya.

The Soviet dictator, Joseph Stalin(his real surname was Dzhugashvili) was an ethnic Georgian who was born and raised in Georgia, one of the larger Caucasian ethnic groups. Among his many crimes, he also killed and relocated many Chechens en masse when he lead the Soviet Union.

While we are on the subject of mass murderers, I wonder why anyone would want to name their son after a brutal mass murderer like Timurlane.

I’m glad the cops finally caught one of the guys responsible for that horrific bombing in Boston. It helps to understand the part of the world they are from, to understand their motives, but this in no way exonerates them from responsibility. My heart goes out to all their victims, and the victims’ families. 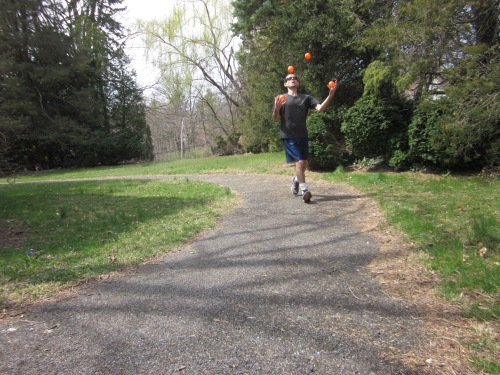 One of those things many runners and other athletes are always trying to improve is their VO2max. Shockingly, this also happens to be true of jogglers. What is VO2max? It is our maximum oxygen uptake, or aerobic capacity, or the amount of oxygen an athlete can use. It is one of the most important determinants of athletic performance, since a high VO2max means you won’t run out of breath too quickly, among other things. Elite endurance athletes tend to have a very high VO2max, while sedentary people have low ones.

Most people’s VO2max can be improved with regular training. Even some athletes can improve their VO2max. Let’s see what the science has to say about this. According to the Department of Circulation and Imaging, Faculty of Medicine, Norwegian University of Science and Technology, Trondheim, Norway in the study Aerobic high-intensity intervals improve VO2max more than moderate training:

: High-aerobic intensity endurance interval training is significantly more effective than performing the same total work at either lactate threshold or at 70% HRmax, in improving VO2max. The changes in VO2max correspond with changes in SV, indicating a close link between the two.

I realize this isn’t anything new. I can just hear the seasoned athletes reading this exclaiming: “I know this already!”. Indeed, it was high intensity interval training that allowed Roger Bannister to break the 4 minute mile in 1954. Even today, many runners use this method to improve speed and endurance. This may be well known, but for people new to running this info is important.

However, if you’ve never tried joggling before, you may be curious to know just how much stamina is required to run and juggle at the same time(I don’t have any actual numbers, but it does require “significantly” more stamina than running). If you take up joggling, your VO2max will play a very important role in how well you do, besides your coordination. When I first started learning to joggle, I very quickly tired out after about 30 seconds(not to brag, but today I joggled 3 balls for 35 minutes without a single drop, but dropped the balls several times while doing 4 ball joggling). I just didn’t have the stamina. I don’t know what my VO2max was when I was just a runner, but I’ll bet anything it is much higher now as a joggler.

Joggling 3 balls isn’t as much of a challenge as it used to be. So I’ve been doing 4 ball joggling, which requires even more stamina since my arms have to be even faster. I think my VO2max may be improving slightly due to my 4 ball joggling training, but I rarely go beyond 40 seconds joggling 4 balls without dropping.

Just so that you know, few things will make your heart pump faster than the early stages of joggling. I admit that it has even scared me a little. But this doesn’t happen anymore, I think my heart has adapted.

Once your juggling technique is solid, after joggling for many miles your legs will feel the burn more than your arms. 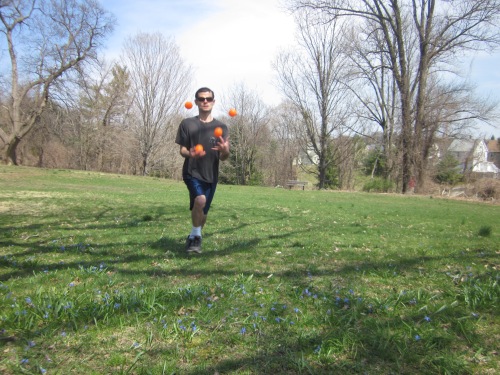