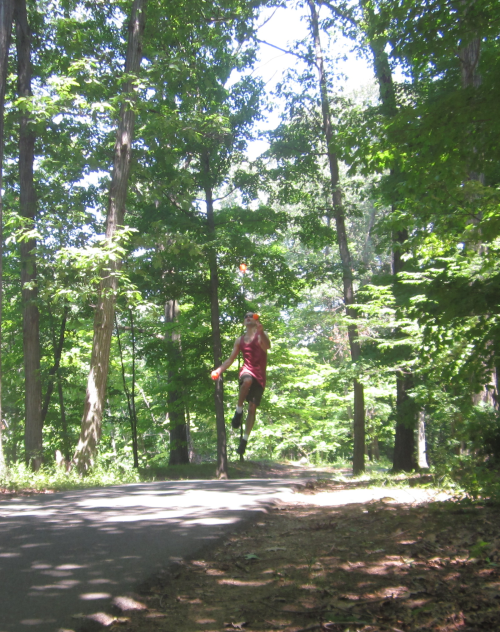 It should go without saying that optimal nutrition is an absolute requirement for endurance running. The most important thing an athlete must do to prepare for long runs(besides hydration) is to maximize their muscle glycogen, which is the body’s main fuel source(and the more vigorously you run, the more your body will rely on glycogen) during long bouts of vigorous exercise. Unfortunately, once glycogen is depleted, a runner “hits the wall”, and will slow down, or even stop due to fatigue. Hence, the “Holy Grail” for endurance athletes is something that spares glycogen for as long as possible by using another fuel source or other methods.

Carb-loading, which is something practically all endurance athletes are already doing doesn’t necessarily “spare” glycogen – it merely maximizes the supply so you don’t run out too soon. Even with optimal carb-loading, trained runners can still “hit the wall” somewhere between 15 – 20 miles.

If you’re running a marathon, this isn’t good enough. Assuming the athlete has already carb-loaded to the max in the days and hours before the run, especially with their last meal, can carb-rich snacks immediately before the run help prevent glycogen depletion, and improve performance?

I have long wondered about this. Obviously, you can’t eat too heavily immediately before running long distances, this can cause digestive problems that will interfere with your run. Some trainers even advise athletes to not consume carbs before runs. Fortunately, I found a study that attempts to find the best approach. According to the School of Sport and Exercise Sciences, University of Birmingham, Birmingham, UK, in The myths surrounding pre-exercise carbohydrate feeding:

It can be concluded that advice to avoid carbohydrate feeding in the hour before exercise is unfounded. Nevertheless athletes may develop symptoms similar to those of hypoglycaemia, even though they are rarely linked to actual low glucose concentrations. An individual approach may therefore be necessary to minimize these symptoms even though they do not appear to be related to exercise performance.

I very often eat or drink something 10 to 30 minutes before an endurance run( 90+ minutes) and based on my experiences it seems to help. However, a few times when I went overboard by drinking too much juice, I did experience that nasty “reactive hypoglycemia”. This is different from regular hypoglycemia and usually isn’t a serious condition. The trick is to figure out how to just consume enough carbohydrate without causing an insulin response that leads to reactive hypoglycemia and reduced performance, if this is a problem for you. Diluted cherry or beat juice is my favorite, and sometimes raisins. Don’t eat anything immediately before a long run with too much fiber, protein, or fat since this can slow down digestion and cause upset stomach(the same goes for eating or drinking during an endurance run).

So it looks like consuming carbs immediately before a long run isn’t a serious problem for most people. This may help delay glycogen depletion.

Another possible strategy to help delay glycogen depletion and/or fatigue is to train your body to use more fat for energy. This can be tricky, even though our fat reserves(even in skinny runners) contain thousands upon thousands of calories.

Just training on a regular basis can likely train your body to use more fat for energy. The body also just becomes increasingly efficient at using energy from all sources the more you exercise(you eventually plateau after several months), which can make it harder for the overweight to lose most of their excess weight.

Can fat intake influence how well we perform at endurance exercise? According to the Department of Physiology and Biophysics, School of Medicine and Biomedical Sciences, Buffalo, New York, in A perspective on fat intake in athletes:

Data from recent studies in trained athletes, who were fed iso-caloric high-fat diets (42% to 55%) that maintained adequate CHO levels, have shown an increase in endurance in both men and women when compared to diets composed of low fat intake (10% to 15%). The magnitude of the effect on endurance was significant at high percentages of maximal aerobic power and increased as the percentage of maximal aerobic power decreased. Based on this review, a baseline diet comprising 20% protein, 30% CHO and 30% fat, with the remaining 20% of the calories distributed between CHO and fat based on the intensity and duration of the sport, is recommended for discussion and future research.

Unless I am misreading this, it is suggesting that increasing fat intake improves endurance in athletes. However, this may not be such a good idea if you are trying to lose weight.

See what works best for you, experiment.