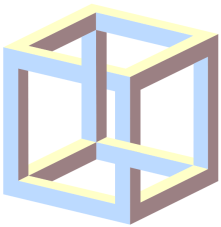 An example of a paradox, an impossible cube. Source: Wikipedia 4C

Paradoxes abound in science, and this is especially true when it comes to health. There are those 2 pack a day smokers who die at 90, and there are those people who eat healthy and exercise yet drop dead of a heart attack at 50. There is a phenomenon similar to this called the “obesity paradox”, in which obese surgery patients have a lower death rate compared to “normal” weight surgery patients.

Overweight and moderately obese patients undergoing nonbariatric general surgery have paradoxically “lower” crude and adjusted risks of mortality compared with patients at a “normal” weight. This finding is in contrast to observations from the general population, confirming the existence of an “obesity paradox” in this patient population.

Note the “moderately” before “obese”. According to the same study, severe obesity has no protective effect. Still, it seems odd, even incredible that obesity would have a protective effect at all. This doesn’t mean of course that it is okay to be obese, since obesity is associated with many very serious health conditions.

Why obesity seems to have a protective effect on many surgery patients is a mystery. This will require a lot more research. In the mean time, there is no good reason to abandon a healthy lifestyle just because of this paradox.