This is the first time I’ve ever done this, running 20 miles two days in a row. I usually do one 20 mile run per week, occasionally two. However, due to the extreme cold and icy conditions earlier this week I did little running then, so I thought I’d make up for it on friday and saturday when the temperature went up.

The 20.61 mile run on friday was my first ever run to the state of Connecticut. It felt thrilling crossing the New York/Connecticut border, though I realize it is just an arbitrarily drawn political border that means practically nothing of geographic or cultural significance, but it was still fun. Sure, I realize it also represents a border between New York and New England, but there are many towns in New York that have a New Englandish feel to them.

It was snowing for about the first 1/3 of the run, then it rained a little during the rest of the run. It felt great “introducing”(though I am not the first) joggling to the people of Connecticut. The people who saw me were amused and impressed, especially the kids.

It took me 4:18 to complete the run to Stamford, Connecticut, due in part to the wintry conditions though it was almost 40 F. There was so much slush and big ice patches in some spots. I also had a backpack full of juice, and a bunch of energy bars on me. I slipped and dropped the balls a few times. 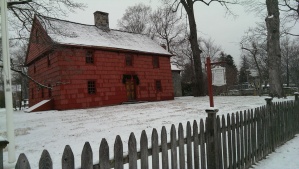 I ran mostly along route 1, also called the Boston Post Road, which is the most direct way of getting to Connecticut. There’s lots of interesting historical sites on route 1, both in New York and in Connecticut. One of the more interesting ones is the Putnam Cottage, in Greenwich, Connecticut. It is named after Israel Putnam, the American revolutionary war general, who made his daring escape from the British close to the cottage. General George Washington also stopped here with his troops in 1776, when it was used as a tavern. Going east from Greenwich, you will enter the city of Stamford, which is where I ended my run and took the train back home. These days the city of Stamford appears to be booming, with so many new businesses sprouting up all over the place.

The run the next day(saturday) was a 21.28 mile run on the Putnam* trail to Elmsford/Little Iran and back, a route that I’ve done countless times. The temperature was in the mid 50s during this 3:19 minute run, though there were occasional ice patches and big puddles on the running path. There was a light rain during most of the run. I was able to run almost like it was spring because of the unseasonably high temperatures and because most of the ice and snow from last weeks storms have melted. I feel a little sore due to the 2 long runs 2 days in a row, but I believe I will recover relatively quickly. I think even my ability to recover has improved.

I saw many red cardinals while running up to Elmsford, it’s always a joy to spot them and hear their birdsong. How are you keeping fit this winter? I hope you’re all doing fantastic and are as fit as ever!

A word of warning: Do not try running two very long runs 2 days in a row unless you’ve done enough training. This can greatly increase your risk of injury. If you want to be able to do this, build up to it slowly, start out with one 20+ mile run once a week, then add a second 20+ mile run many days after, then slowly bring them closer together.

* Named after the same Putnam mentioned before but it is called “Putnam” because this used to be a railroad route that connected New York City with Putnam county in upstate New York.