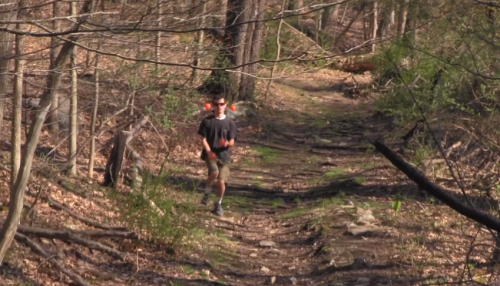 I sometimes say that anyone can learn to joggle. While this may not be entirely accurate, what I’m really trying to say is that it is not as difficult or as incredible as it looks.

What people see is the result of a ton of training. It has taken me many years to get the point where I am at now. I have joggled for thousands of miles, and just recently joggled my first 1,000 miles for the year.

What level am I at now? Last week, I did a 20 mile joggling run while it was in the mid 80s and humid. Several of those miles were on rocky, hilly, curvy forest trails. Surprisingly, I didn’t drop the balls even once, though I had to take 2 short breaks to cool off and drink some Gatorade. I even did a lot of tricks, especially in the first half. I was actually expecting to drop because of the heat, and how much I was sweating, and because of the rockiness of the trails. But it looks like my muscle memory didn’t fail me even in these extreme conditions. This isn’t the first time I’ve run 20 miles without dropping, but it was the first in mid 80s weather. I also did a 12 mile run last week, much of which involved joggling up the steepest hills ever(for me), and didn’t drop during the entire run. I was shocked, to be honest.

As much as I know this is the result of training, I can’t help but wonder if my genes give me an edge somehow. Alright, that sounds ridiculous even to me and those who know me best. I don’t come from a long line of gifted athletes, nor have I ever displayed any athletic ability before I took up joggling. Nor have I ever been a good dancer, which is similar to juggling and joggling.

While my research hasn’t lead to anything specifically focusing on juggling and genes, I did find an interesting study done on creative dancers which shows an interesting correlation between creative dance performance and certain genes. According to:
Gene Polymorphisms Are Associated with Creative Dance Performance:

The association between AVPR1a and SLC6A4 polymorphisms and creative dancing does not exclude the presence of the same polymorphisms in nondancing groups of subjects. Almost all of us dance and almost all of us have engaged in sports. What the current study suggests is that the combination of polymorphic variants contributing to creative dancing is overrepresented in the dancers. There is no reason to suggest that the nondancer athletes or the control group of nondancers/nonathletes are devoid of these polymorphisms, but the current study provides evidence that these variants are relatively scarce in other groups not specifically selected for the creative dancing phenotype. Importantly, we not only compared creative dancers to performing athletes but also validated the case-control design using a family-based study that avoids the conundrum of a comparison control group that might be “contaminated” with polymorphisms contributing to creative dancing. As for most complex traits, the effect size of these two genes is small and in Risch’s terminology will have small displacement.

These “dance” genes may play a role in coordination, but also show links with spirituality, and artistic creativity. They also seem to be linked with serotonin and brain anatomy. Serotonin plays an important role in the central nervous system. It affects mood and behavior, and many mind-altering drugs strongly influence our serotonin pathways.

It is difficult to disentangle what is really going on here, since genetics is very complicated and I lack expertise in it. I often claim that joggling is just like dancing, so it is possible these “dance” genes may influence a person’s joggling ability, though this is speculation on my part. Obviously, no matter how much a person trains, not everyone can reach the same level of joggling ability, just as not everyone can reach the same level of dance ability or martial arts ability. I do wonder sometimes if all the people I know who can’t even learn how to juggle may be genetically disadvantaged somehow.

However, none of this means that if you are trying to learn to joggle you should give up if you aren’t a good dancer or lack coordination. Keep in mind my background as a lousy dancer and even worse athlete, and how I started juggling and joggling while recovering from a car accident. The brain is very plastic; even if you lack these genes(assuming they give an edge to pursuits requiring coordination), it may still be possible to become a skilled joggler with enough practice.