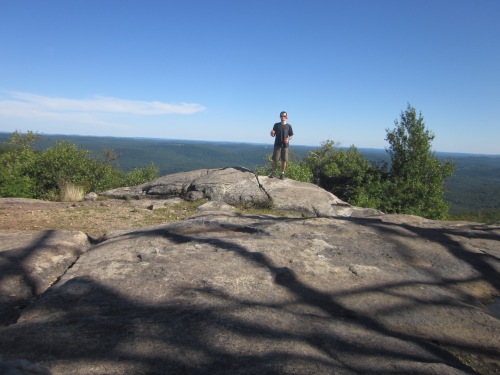 I’m not that fast of a runner, but lately I’ve been doing 10 mile joggling runs in a little less than 1:20, mostly without dropping. I even recently did a 5K in 21:39, which is a new record for me, and I didn’t even drop once. In fact, compared to how I was doing last summer, I am both faster and dropping less.

How is it possible to do this? Obviously, it takes a lot of practice. Once you get used to joggling, juggling while running becomes so hard-wired into your brain and muscle memory that the juggling is mostly automatic. Deciding when to switch from automatic mode to conscious control mode can be tricky. For complicated tricks, I have to put myself into conscious control mode, which means focusing more on the balls, and less on my surroundings. Obviously, I am in conscious control mode when there are many people and obstacles around. I don’t want to bump into anyone or have a ball hit someone in the face!

This is why most people do their speed work on tracks or on paths with no obstacles. The “rules” of course are rather simple: Let your running set the rhythm, and the faster you run, the faster and lower your juggling pattern. I learned this from Perry Romanowski and Joe Salter, two amazing jogglers whose joggling tips were extremely valuable for helping me improve my joggling. These rules are actually the basic rules of joggling, but it is helpful for even experienced jogglers to review them and make sure they are adhering to them.

Besides this, what I do to try to joggle as quickly as possible is to try to expend as little energy as possible on the juggling, so my leg speed is minimally compromised. One way I try to do this is to try to harness as much energy as possible from the up and down bounce of running to help my arms throw the balls. I even try to take this to the extreme of trying to not throw the balls at all, I just have them effortlessly bounce off my hands in a juggling pattern. Okay, so I don’t actually do this, but sometimes I like to think I come a little close to achieving this energy efficiency ideal while speed joggling. There are times when I try to pretend that the balls aren’t even there and I am not juggling; I have mixed success with this crazy approach.

Sometimes I also like to think of my arms as propellers helping to push me forward; just because I’m juggling while running doesn’t mean I can’t use my arms like other runners. This probably doesn’t help, but we like to think it does.

All the ordinary rules for improving speed among runners apply:

For intervals, I alternate between 30 second maximum speed running with 30 second very slow running for 13 minutes. Before I do the intervals, I run slowly for 5 minutes to get my muscles ready. Intervals can be brutal. I rest and eat a recovery snack or meal after this, and may do a separate 5 mile run later in the day. I used to do 5 mile runs immediately after doing the intervals, but I stopped doing this when I noticed no improvement. I also drink probiotic beverages or eat fermented vegetables to help prevent gastric distress while running fast or long. I think it helps.

What do you do to improve your speed? And if you’re a joggler, how do you speed joggle?