Joggling across the Brooklyn Bridge

Last week, I joggled across the Brooklyn Bridge from Manhattan to Brooklyn for the first time on a slightly warm, sunny day. I didn’t blog about this earlier because I was hoping some good photos that were taken that day(not by me, but by the many people on the bridge) would surface, but unfortunately this hasn’t happened.

Since the span of the Brooklyn Bridge is a little over 1.1 miles, this is by no means a great athletic achievement, though it felt amazing since this was the first time I joggled from one New York City borough to another. The views and the crowd support were priceless. I’m sure other jogglers have done this before.

I kept thinking I was going to drop the balls due to the crowds, the cyclists, the noise from the cars, the occasional beautiful woman, and the temptation to keep spinning(I did this a few times) around to see the Manhattan skyline, but no, I didn’t drop any of the balls even once. The incline toward the middle of the Brooklyn Bridge isn’t much of a challenge if you’re an experienced runner, though it did tire me a little. The wind was light to moderate.

I mostly ran on the bike path(or the line between the bike path and pedestrian path) of the walkway, since this was mostly clear, while the path for pedestrians was very crowded. I had to maneuver my way around a lot of tourists and occasionally some slow cyclists on the bike path, shocking many people as I zoomed by, but eventually made it to downtown Brooklyn in one piece where I took a break due to all the traffic and because my throat suddenly became very sore. It may have been due to all the traffic on the bridge and because my lungs aren’t used to running in the city(I mostly joggle in the suburbs or wilderness areas). On the bridge I only had to slow down just twice due to the crowds, but did my usual speed almost the entire way across.

I resumed joggling along the Brooklyn waterfront, and almost fell in the water a few times. You can get amazing views of the lower Manhattan skyline from here, especially the new Freedom Tower, which is nearly completed. This is the skyscraper that is on the former World Trade Center site, so it’s nice to see we have made a comeback from that dark, horrific day on september 11, 2001. I mostly enjoyed running around there, in spite of my throat, and memories of that day.

After another short break, in which I just power-walked instead of running or joggling, my throat felt better. I made my way along Atlantic avenue and many side streets to Parkslope and then to Prospect Park, joggling about half way there, dropping the balls a couple of times, coughing occasionally, then taking a few water breaks since I was sweating a lot and to help relieve my scratchy throat.

Prospect Park is basically Brooklyn’s Central Park, and I joggled around the entire main running path which forms a big circle around the entire park, then had lunch in a shady spot. After this, I explored Parkslope for a bit before heading home. Like Central Park, Prospect Park is full of runners and cyclists(and weirdos and muggers), including some barefoot runners, more than I see up in the suburbs. Many people were amazed by the joggling, especially because I was running faster than usual, though it isn’t all that new to Brooklyn or New York City. The kids down there love it, and I loved their Brooklyn accents.

So yes, you can joggle across the Brooklyn Bridge if you’re an experienced joggler, and it is not too crowded. It is likely much easier on a weekday(I did this on a thursday) than during the weekend. And Parkslope looks like a great neighborhood to be a vegan. The sore throat was likely due to pollution, and was gone after a few days. Luckily, it didn’t interfere with my running all that much while I had it.

Russian Orthodox Cathedral of the Transfiguration of Our Lord 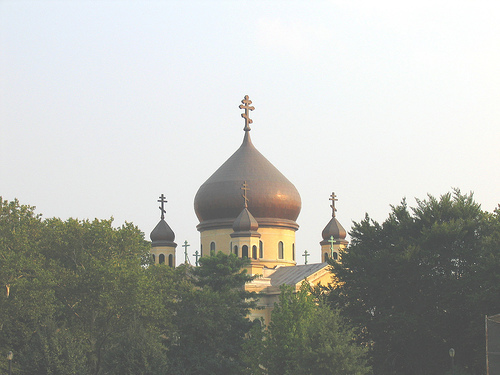 One of the largest and grandest of Orthodox churches in New York City is the Russian Orthodox Cathedral of the Transfiguration of Our Lord. Although I am not an Orthodox Christian, I can admire the ancient architecture of this Cathedral, as if it was an over-sized gift from Russia. While it looks like a church in Russia, or even Ukraine, it is located at 228 N 12th Street, Williamsburg, Brooklyn. It was built in 1921. The style of the cathedral is pretty typical of Russian Orthodox churches, mixing Byzantine and ancient Slavic architecture, most notably the characteristic onion dome.

In fact, the Cathedral looks so Russian, I probably could have fooled some of the people reading this into thinking I just got back from Russia. Williamsburg, Brooklyn is just across the east river from Manhattan, so it’s a short subway ride away, or if you prefer, you can walk across the Brooklyn, Manhattan, or Williamsburg bridge. Or if you’re a good swimmer, just use the river.

In recent years, Williamsburg, and the neighborhoods surrounding it have been on the rebound both economically and culturally, with hipsters, yuppies, and bohemians flooding into these formerly rundown industrial areas. The Cathedral is situated at the border between Williamsburg and Greenpoint, which is often called “Little Poland” because of the large Polish Catholic community in the neighborhood(there are many Slavic peoples in the area, but Poles are the largest group). Williamsburg, on the other hand, has a large Orthodox Jewish community as well as a very ethnically mixed area with a thriving arts and music scene, which extends into Greenpoint. Greenpoint also has a growing Hispanic community.

A little further south, the neighborhood of Parkslope, which is adjacent to Prospect Park, also has a thriving arts scene, but is more upscale. In spite of resistance from long-time residents, who tend to be opposed to the construction of condos, Parkslope has become very “yuppified” in recent years, feeling more like Manhattan than Brooklyn in many ways.

Increasingly, many vegan and vegetarian restaurants have been sprouting up like alfalfa sprouts in the neighborhood, along with many Asian restaurants. Prospect Park is basically Brooklyn’s version of Manhattan’s central park, so it’s a terrific place to joggle or for bird-watching. Some areas of the park have been set aside for reforestation and are off-limits to homo sapiens, but not to squirrels or birds. The neighborhoods to the east of the park suffer from a lot of violent crime which sometimes spills over into the park, so be careful.

There is so much more to discover in Brooklyn, this is just a small slice of it.