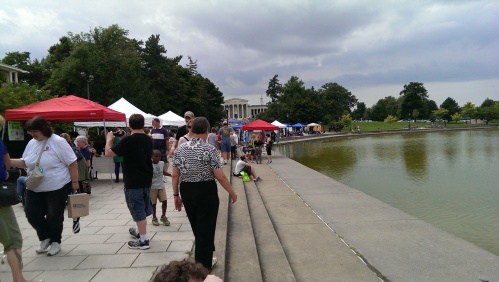 Last week’s Vegfest in Buffalo’s Delaware park was a blast! It surpassed my expectations and even the expectations of the organizers. It was a big success thanks to the indefatigable efforts of the gang at Vegan Pathways and others. To think this is the first one; next year it should be even bigger. They originally expected 2,000 people to attend. Turns out over 5,000 attended, and there are reports that some people went vegan as a result of some of the talks(in particular by Georges Laraque).

There was so much going on at this fest it would be difficult to encapsulate it all in one post. There was an almost endless variety of delicious vegan food, inspiring speakers, live music provided by Alison Pipitone and the Skiffles Minstrels(these guys are really good!), hilarious puppeteers, and so many other things. I found the martial arts performers from Master Chong’s World Class Tae Kwon Do among the most inspiring, along with various yoga(Acro Yoga Buffalo) and acrobatic performers doing incredible athletic feats that put me to shame. 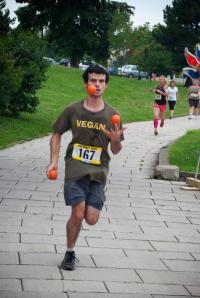 Were some of you expecting me to run in my underwear?

The Tofurky Trot 5k at the beginning of the fest was thrilling. I joggled the entire distance without dropping. I was a bit concerned I might drop due to my unfamiliarity with the layout of this park. Though I’ve been to Buffalo before, I’ve never been to Delaware park. I think I managed to complete the race in 20 minutes, 5 seconds. The crowd support was incredible, thanks to everyone for cheering me on. It was awesome running with so many other vegans(and a few almost vegans), including Georges Laraque, Andrew Peters, and Esther the Wonder Pig’s dads running in their underwear. The Buffalo Joywalkers danced the entire 5k!

When not eating or talking with other vegans, I would walk around the fest while juggling. A lot of people, especially children, enjoyed it, especially when I dropped. It was great connecting with so many other vegans, almost vegans and people curious about veganism. I feel bad for not staying the entire time, but I had to drive nearly 400 miles through the rain to get back home.