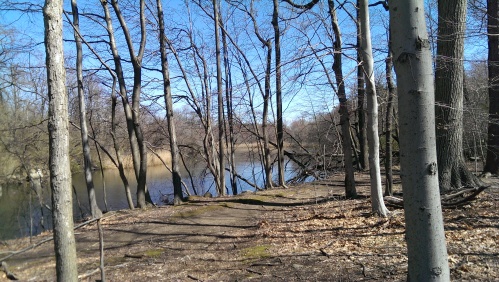 One of my favorite running trails in the early spring.

When you’re a runner, you’re always looking for that special something to give you that “edge”, to improve speed and/or endurance. There’s no shortage of nutrients, herbs, and even drugs to choose from. Overwhelmingly, most are not proven to work, but that doesn’t stop many runners from taking even the ones that science shows are useless. Now this may be a little different for vegan runners. Some nutrients that meat-eating athletes take for granted like iron, zinc, or possibly creatine may help improve athletic performance in vegans since these nutrients aren’t as plentiful in plant foods or are harder to absorb from them.

There’s some evidence that vegetarians tend to run a little low on arginine compared to meat-eaters: Plasma homocysteine levels in Taiwanese vegetarians are higher than those of omnivores.

Now like I said before, it is possible that some nutrients may benefit vegetarians, especially vegans, but not meat-eaters and this may be the case with arginine for reasons cited above. I tried to see if I could find any studies that looked into this specific question, if arginine could benefit vegetarian athletes. I couldn’t, but here are some studies that looked into arginine in general.

According to Eur J Appl Physiol. 2013 Jul in No effect of acute L-arginine supplementation on O₂ cost or exercise tolerance:

In conclusion, acute dietary supplementation with ARG or ARG + CHO did not alter biomarkers of NO synthesis, O₂ cost of exercise or exercise tolerance in healthy subjects.

It doesn’t appear to be useful based on this.

This study came to a different conclusion. According to J Strength Cond Res. 2010 May;24 in: Effects of arginine-based supplements on the physical working capacity at the fatigue threshold:

These findings supported the use of arginine-based supplements, at the dosages examined in the present investigation, as an ergogenic aid for untrained individuals.

According to the second study, it did help, although they may have been measuring things a little different. Both studies were small studies, though the second was the larger study.

What to make of this? I don’t think anyone should take arginine based on the evidence, and more research obviously needs to be done. Now it is possible that vegans could benefit more from arginine supplementation, but this is speculation on my part. Based on my readings, it may be potentially harmful to take one isolated amino acid in large amounts since this could displace other important amino acids.

Since there’s plenty of vegan runners out there that take no arginine supplements and show no acute arginine deficiency symptoms, I really do not believe supplemental arginine is necessary. If you’re a vegan, eat as many different types of legumes, vegetables, fruits, and whole grains as you can, to make sure you are getting optimal amounts of all the necessary nutrients. A vegan multi-vitamin that has iron, zinc and B-12 may also be a good idea, just in case.