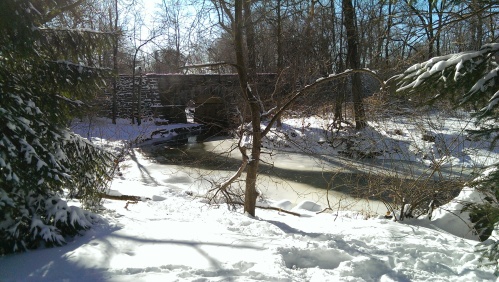 If you’ve been following my blog long enough, you probably know that I usually run 50 to 60 miles per week. Unfortunately, the recent snowstorm that hit much of the eastern U.S has made it difficult to maintain this routine. My usual routes are covered in several inches of snow or ice, and it is going to take a while for most of it to melt. And more snow is expected next week.

It’s no big secret that I’m not a big fan of treadmills or indoor exercise in general. And treadmills don’t like me much either, so the feeling is mutual. I’ll use it when I absolutely must, but going beyond an hour is difficult for me since it feels tedious and dull.

I can still run outside, but it takes longer and it is more tiring to cover my usual routes. If you’ve been following my crazy blog long enough, you know I can run long distances in snowstorms, but mostly in the early stages when there is little snow on the ground. Unfortunately, due to all the snow outside yesterday, instead of running to Valhalla like I usually do, I ended up running to Mount Olympus, which is closer. For those new to the blog, Valhalla is a town 12 miles north from me, and Mount Olympus is a diner in Yonkers. What did you think I was talking about? I have traction enhancers on my sneakers, but they merely prevent slipping, they don’t necessarily make running in snow less tiring.

With my routine temporarily reduced, this leaves me wondering how much of my endurance capacity will be lost due to “detraining”. Fortunately, it doesn’t look like much. Overall, it is much easier to maintain fitness than to become fit.

According to Sports Medicine, in “Impact of reduced training on performance in endurance athletes“:

There doesn’t appear to be much to worry about, even though I usually feel cranky if I don’t run on a day I was scheduled to run on. Based on my readings, it appears that endurance capacity can be maintained for up to 2 weeks, even if exercise is greatly reduced. It’s after 2 weeks that reductions in fitness start becoming apparent.

So if Old Man Winter is interfering with your outdoor fitness routine, don’t worry too much about it. Adapt if you can to the outside conditions, but if the situation is too extreme, try exercising indoors whenever possible.