It is for good reason that many people sing the praises of flaxseeds. I’ve even written songs about them; some people may love to sing about red wine or cocktails, but I prefer singing about flaxseeds. 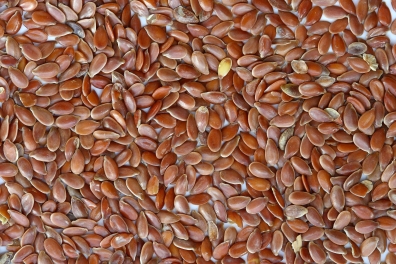 They are a very healthful addition to any diet, due to their unique nutritional contents that are difficult to get elsewhere. Not only are they a great source of fiber, but they also contain the essential fatty acid ALA, and also contain lignans which have phyto-estrogen effects.

Flaxseed has a lot of ALA(alpha-linolenic acid), which is one of the 3 main types of omega 3 fatty acids which are essential for the body’s metabolism. The 2 other types of omega 3s, EPA(eicosapentaenoic acid) and DHA(docosahexaenoic acid), are not found in flaxseed, but are plentiful in fish oil. The body has a very limited ability to convert ALA to EPA or DHA, so we are better off getting it through diet. Omega 3s are important because they help suppress inflammatory processes that may be damaging to the heart or other organs. The benefits of DHA are so widely recognized that many food companies fortify their products with it. DHA and the other omega 3s are particularly important for pregnant and nursing women, since DHA is needed for optimal brain growth.

“No effect of treatment on motor skills was apparent, but significant improvements for active treatment versus placebo were found in reading, spelling, and behavior over 3 months of treatment in parallel groups. After the crossover, similar changes were seen in the placebo-active group, whereas children continuing with active treatment maintained or improved their progress.”

This study wasn’t about flaxseed per se, but did use a fatty acid that is found in flaxseed. Flaxseeds may be helpful for preventing prostate cancer:

“Findings suggest that flaxseed is safe and associated with biological alterations that may be protective for prostate cancer. Data also further support low-fat diets to manage serum cholesterol.”

This is really impressive, and this just involves the omega 3s in flaxseed. The lignan content of flaxseeds are a whole other exciting ball game. Flaxseeds are by far the best source of lignan, containing hundreds of times more than almost all other plant foods. Lignans are phyto-estrogens(similar to the phyto-estrogens in soy) and may help prevent breast cancer, according to research done at Linköping University, due to their powerful hormonal effects. They may not only lower blood estrogen levels but may also lower testosterone levels. The testosterone lowering effect may concern some men, but I don’t think it is a cause for alarm based on the evidence. More research is obviously needed, but I’ll continue to sing about them in the mean time.

The best way to eat flaxseeds is to ground them yourself in a small coffee-grinder, or to use the oil as a supplement or salad dressing. Never use the oil for cooking, omega 3s aren’t heat stable. Flaxseeds also contain significant amounts of protein and minerals. No wonder many people call it a “Super Food”.