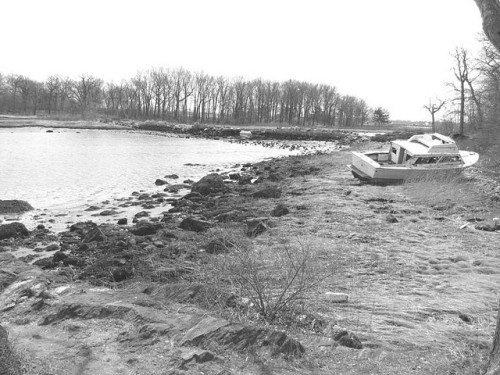 Boat wreck along the Long Island Sound, in the Bronx. I took the photo, but that is not my boat, I am much better at steering boats than that.

This photo was taken in Pelham Bay Park in the north-east corner of the Bronx, the only borough of New York City that is on the U.S mainland. At 2,766 acres, Pelham Bay Park is the largest park(more than 3 times larger than Central Park) in the entire city, with miles of trails meandering through its many woods and marshlands, as well as along the Long Island Sound and its many inlets.

The diversity of wildlife in this park is remarkable for an urban park. Besides squirrels, it is home to many deer, opossums, hawks, owls, turkeys, cardinals, blue jays, raccoons, turtles, and a few people here and there.

Due to its distance from Manhattan and most major tourist attractions, it isn’t very touristy, except for the Bartow-Pell Mansion(that’s a whole other post) in the middle of the park, but mostly during the summer. Like just about all the parks I visit, it is a terrific place to run and observe wildlife, and you can access Orchard Beach from the park. I first learned how to joggle in this park and in the nearby streets many years ago when I lived closer to it.

Luckily(or unluckily, if you prefer more excitement), the neighborhoods adjacent to the park are not among the Bronx’s most crime-ridden, though I’ve observed drug activity in it over the years. The Bronx and Pelham Bay Park shares its northern border with the boring town of Pelham, and the even more boring town of Pelham Manor, which are in Westchester county.