The magenta line was my journey, from north to south and back. The blue line running through the middle of the map is the border between New York City and Westchester county.

This is my first time joggling to Manhattan from lower Westchester. It was a great day to do this, since it was the first official day of summer. I’ve joggled in Manhattan a few times before(taking the train to get there), and used to run there sometimes when living in the Bronx. Most of my path followed the South County trail/old Putnam trail, south through Yonkers and into the forests of Van Courtlandt Park in the north Bronx.

As the trail terminates in the southern portion of the park, I transfered to another trail and made my way to the south-western section of the park where it meets up with Route 9(Broadway). I joggled along the very busy, very hot route 9 into northern Manhattan.

To say joggling the very busy sidewalks in the Bronx and Manhattan was challenging is an understatement. Such an extreme contrast with the mostly personless Puntam trail in Yonkers and in the park. Not only did I have to run through or around large groups of people, but there were also many street vendors in the way. The bridge that connects the Bronx to Manhattan has a narrow pedestrian path, and this was especially crowded and challenging. There were of course some people who were amazed by the joggling. Everywhere, the kids love it. The streets also had a lot of traffic. I did my best to have good joggling/running etiquette, running in the street whenever it was feasible.

The entire trip, to Manhattan and back was 16.25 miles, and it took me 2 hours and 45 minutes to complete. The busy sidewalks, traffic-clogged streets, the heat(about 80 F), muscle soreness, and the upward slope of the Putnam trail as I went north all made me run a little slower than usual.

I didn’t stop at all this time to drink water or anything, except to joggle in place a few times due to busy streets. Remarkably, I didn’t drop the balls even once(though I stopped juggling for a few seconds just a few times to cross very busy streets). The really cool thing about the Putnam trail is that it has no interruptions from Van Courtlandt park to about the middle of Yonkers. Every major or minor street that crosses the trail goes under it. It’s only in northern Yonkers where the trail has to cross some streets.

I was only in Manhattan for about 40 seconds, and in the most northern neighborhood, Inwood. This is very far from Midtown and Central Park. This shows how far I was from Midtown Manhattan. The big park in the middle is Central Park and the magenta line represents my path. Still, I managed to joggle through 3 counties, Westchester county, Bronx county(only a small slice of it), and NY county(Manhattan and only very briefly).

What kind of fitness adventures are you planning for the summer? 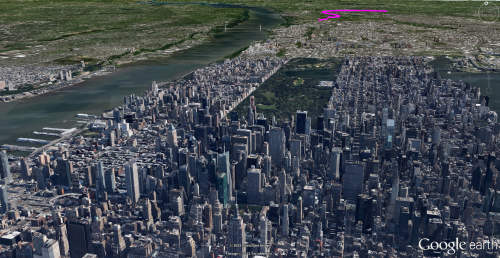