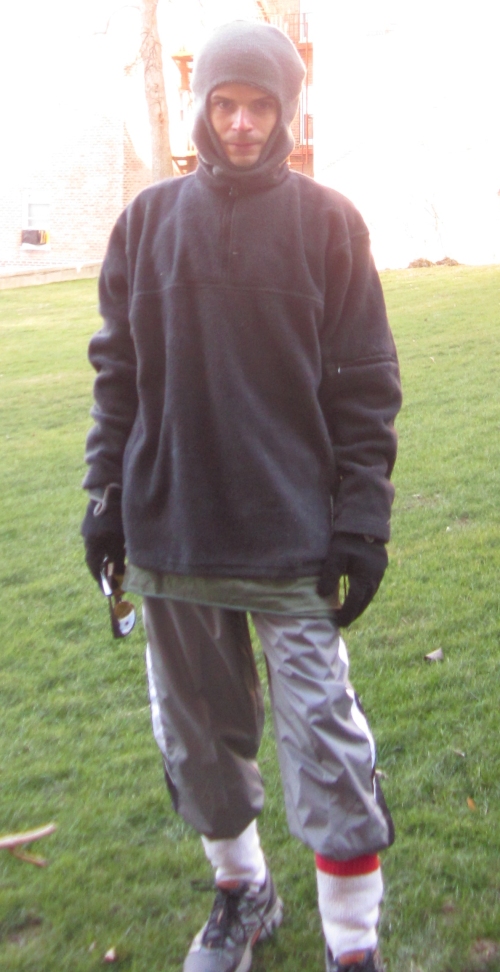 I’m loving this cold weather! Bring it on! It was about 16 Farenheit(-8.8 C) when I joggled for an hour this morning. I sure did sweat a lot under all those layers, but I really had no choice. It was great seeing many other people out there running or power-walking. It seems they also adhere to the “No Excuses” approach to fitness, just like I do. It is the only approach that works.

I think my respiratory system is adapting to the cold, since I hardly cough anymore and I don’t suffer from shortness of breath like before. I think being in good health makes it easier to adapt to extreme weather and circumstances, so I am thankful for my health. It’s still flu season, so be careful and get a flu shot if you haven’t already.

Joggling is a winter sport

Some people said it couldn’t be done, but everyone must know that joggling can be done during the winter, even with snow on the ground. Happy Thursday everyone!

What goes through the mind of a joggler?

Besides how cool and awesome it is to joggle?

Contrary to what many might think, it doesn’t require deep concentration. The experience is somewhat meditative, but not really all that different from what goes through the mind of a runner. The juggling is almost totally automatic, although I may have to correct myself every now and then if my mind wanders or becomes distracted. Or if I am changing speed or doing tricks.

Rhythm is everything in joggling. The running is what sets the rhythm and the juggling follows it. It is almost like making music; I often have glorious music playing in my head(I never listen to recorded music while running), music which roughly fits the rhythm of my joggling. Sometimes I even hum or sing a little to give a melody to the rhythm. I rarely focus on the rhythm as closely as I used to. It’s there, but I only have to pay attention to it when I need to make adjustments. Beginners need to pay much closer attention.

Being one of the few people in the country who regularly joggles(there are none in my immediate area) adds a certain mystique to the activity, both for me and onlookers. Like I am just that much closer to unlocking the secrets of the universe. It is running meets esoterica, the next stage in evolution for running and fitness. Above all, it’s hard to not feel special while doing it.

But at the same time, I often feel it is rather mundane – it is just a type of exercise, that’s all. I’m just running with a little something added, it’s not like I am saving the world. It’s just that I am better coordinated than most, although to what degree this is genetic rather than due to training is difficult to figure out.

Joggling seems to makes life’s problems much smaller, much more so than mere running. It shrinks an angry elephant to the size of a mite. I believe it is the “joggler’s high” which accomplishes this. It adds magic to running, and beauty and stimulates parts of the mind that I didn’t know exist.

All this, from running with a little something added.

Old Man Winter did not want me or anyone out there yesterday in his snowstorm. As time went by, the wind he threw at me became angrier, and my hands became colder and wetter, as if joggling in the snow was the ultimate act of defiance. In spite of all this I refused to concede defeat, and managed to joggle straight for an hour, even making good time, as if it was a sunny 50 F(10 C) degree day. I even managed to do my usual route along the Bronx river.

This is unlike the last time I joggled in a snowstorm for around 20 minutes(and ran and power-walked for another 30 minutes) running into stores to take shelter every now and then. Yesterday was the real thing.

Due to my feet and hands becoming very cold and wet, I definitely need better winter clothing. I dropped the balls many times due to the wind and my cold hands feeling like they were going to fall off, even though I had gloves on. There was almost no other soul out there. Luckily there was little snow accumulation, since it was about 35 F(1.6 C). I almost slipped a few times, but always managed to quickly correct my footing. If the temperature had been below freezing, I probably wouldn’t have been out there for an hour.

This was one of my most humbling joggling experiences. It felt fantastic upon completion; it was such a relief to get home, to finally warm up and dry off. I do not recommend joggling in snowstorms, unless you have a lot of experience hiking or playing sports in the snow. Just because I can sort of do it, doesn’t mean you should.